View of the Floodplain with dark clouds approaching

Lately this blog has become quiet and so has my life. Helping at Mukolo Camp, a newly developing campsite in the Zambezi region, has been nice but uneventful. With a view of the Kawango floodplain we are visited daily by a variety of birds and sometimes even otters and crocodiles, but not a lot of people. For the first time in Namibia there are many trees and countless shades of green, but the temperatures have dropped and and most days now are rainy and grey.

Unfortunately I don’t often get to use the swimming pool

My days are usually spent ironing linen, painting signs or (my favorite activity) working with wood to help build furniture for the self-catering cabins. Slowly, Henni is realizing that even as a woman I can be  trusted with tools and his wife Veronica is making sure we get fed well. Lately though the southafrican volunteer Travis and me have started to take turns preparing dinner every now and then which is nice for a change. 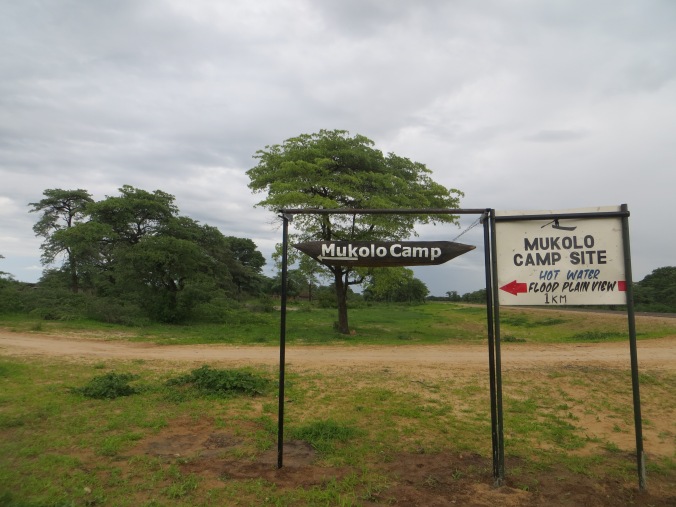 One of my first jobs: writing on a Mukolo (wooden canoe)

The evenings end early and are filled with the constant noise of countless frogs. If we get lucky, the hippos even come to visit us and we can watch them from the terrace. But after dinner there is a habit of everyone taking up a book or their phone and this is starting to bore me. I am missing lively chats and new people, slowly realizing just how important having a social life is for me! I love nature and it has been lovely here, but I think it is getting time to move on. I need to be on the road again, hopefully meeting lots of people along the way. Luckily there is only a week left of my visa and time here until I cross the border to Botswana and I am already excited to see what new experiences this country will bring… 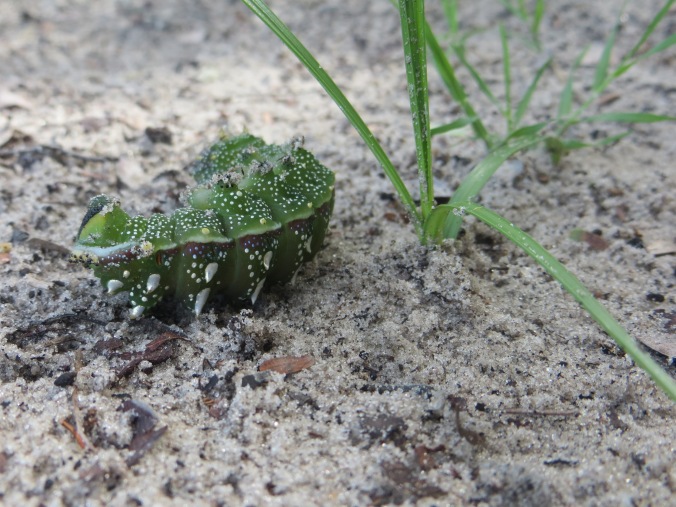 One of the smaller but nonetheless beautiful animals here

It wouldn’t be Namibia if there weren’t colorful sunsets

My last two weeks have been filled with many laughs and loud screaming, sugary-sweet drinks, sponge fights in the pool and arguments at bed time. Assisting with two summer holiday camps at Amani Development Centre near Windhoek has been a fulltime (workaway) job, but a rewarding one. I taught Dannika how to swim, discovered Petris talent for Macrame, distracted Nena and Enyo more than once when they were homesick and got a lot of smiles, hugs and compliments from the children. And while the first week was a relatively easy start with just eight children and five volunteers to keep them busy and watch over them – taking care of 30 children has been chaotic and challenging to say the least. Planning activities, pulling splinters out of tiny hand and feet, keeping track of everyone during walks in the nature, dealing with poo-stained sleeping bags and becoming a team with the other volunteers I learned a thing or two about children, Namibia and myself: 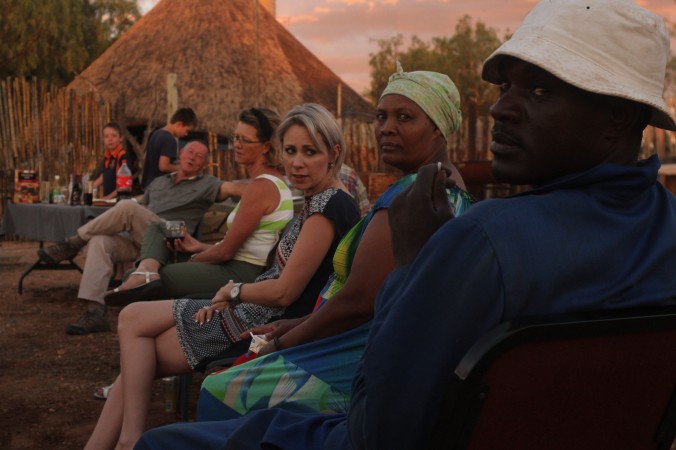 Braai (bbq) with the Amani workers, family, neighbours and kids

Getting ready for the brick-bridge challenge

Painting stones with the children for the Amani walk of fame 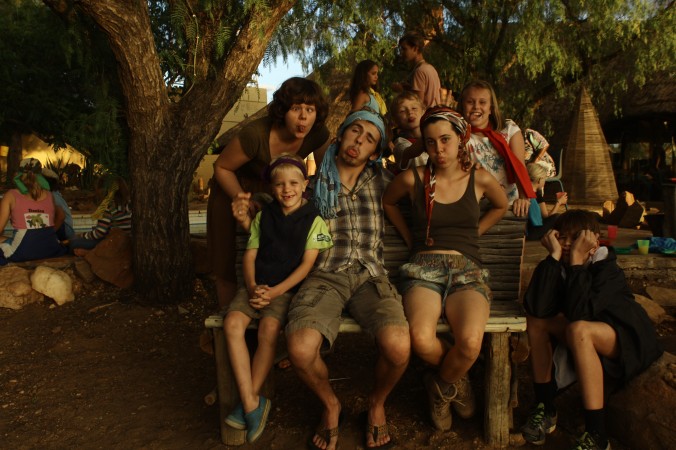 Getting silly with the French volunteers and some of the kids

If you would like to read some more about our time at the camp, Joscha also wrote a blogpost from his perspective. Also many thanks to Bastien for letting me use some of his pictures  (picture 1, 2, 3 and 5). 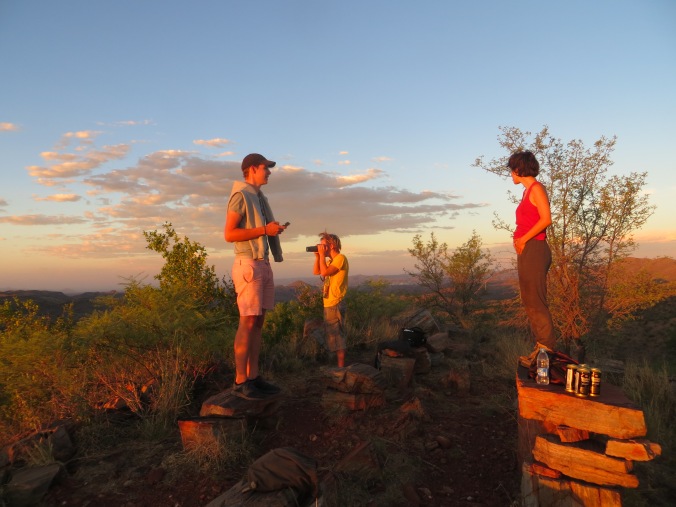 Although I’ve already talked about some of the quirks and surprises Namibia offers, most of you probably have no clue where I am and what I’m doing at the moment. After leaving my first Workaway host early (something I’ll probably write about more later) I am now at the Amani Development Center near Windhoek helping with two summer camps for children. I have to admit that while the camp is fun the 30 children are keeping us quite busy, but if you’d like to see and read more of Amani and our time here check out Joschas blog.

It’s been over a month since I have landed in Windhoek, the modern capital of this dusty country and so many things have happened since then that I barely know where to start. I went on an insane road trip with my family, spent some lovely days couchsurfing in the capital, lived through a turbulent week at my fist workaway host and moved on to another place where I now help to keep the kids of a summer holiday camp busy. I could tell you a lot about the adventures with my family, my workaway trouble or the fun we are having at the camp, but I think I’ll save that for later.

Because when I came to Namibia I didn’t know too much about the country and though I read up a bit about its nature and climate, history and current state my image of the country was very blurry and there were many thing that turned out to be different than expected. So here are four of the things that surprised me quite a bit:

How sparsely it is populated 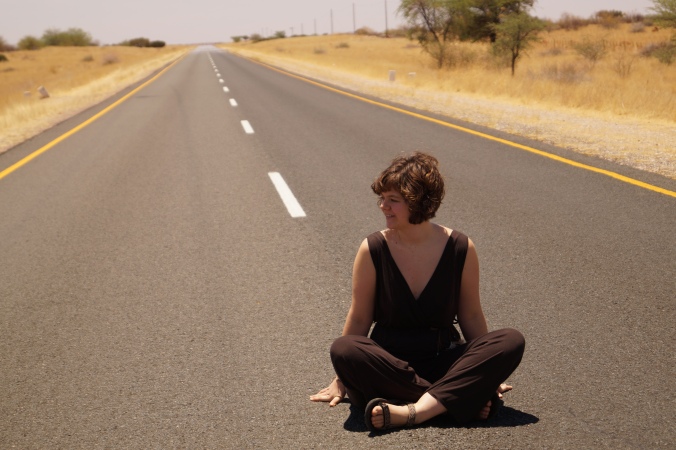 The vastness of Namibia is impressive

Have you ever wanted to put your name on a map? Fancy founding a village all by yourself? Move to Namibia to make your dream come true! Although I knew before that Namibia only had 2.3 million inhabitance I really didn’t realize what that meant for a country this size. From travelling in South America I am already used to bus rides of many hours without seeing any trace of human life, but in Nalibia this was taken to a whole other level. Driving with my parents we would look on the tourist map (scale 1:2 000 000) thinking the next village would be of a decent size – why else would its name be printed bold and underlined? Furthermore is was marked to have a gas station and shops. Well. Turns out a gas station (with a tiny shop inside) is pretty much what makes a village in Namibia.

Add a lodge or a house for the workers and there you have your village. Maybe the closest farms and lodges officially belong to this village, but in reality they are probably quite far away. Just to give you an idea, my first workaway host owned 17 000 hectare land – and this is normal outside of cities and villages. In Peru and Bolivia you will find small shops and markets that sell you almost anything in the middle of nowhere, but in Namibia a lot of people have to drive more than 100km to do their weekly grocery shopping – on roads that only allow you to drive about 50km per hour. So yes – Namibia is about as vast and unpopulated as it gets.

How many animals you can see

A small antelope watching us in Etosha

Naturally I expected to see some game – it’s Namibia after all, but I totally underestimated the amount of animals you see on a regular basis here. Just driving along any road you may spot oryx, springbock, zebras, giraffes, monkeys and many other mamals. One evening when we were having dinner a desert fox walked up and watched us for a long time – probably hoping to get some of our grilled meat. Another day I had to learn the hard way not to leave my shoes outside when a wild cat bit my trekking sandals in two while I was sleeping. It definitely adds a whole new aspect to camping (exciting and slightly scary) to know that wild animals might walk past your tent at night! And in the national parks wildlife reaches a whole different level: we spotted elephants, rhinos, buffalos, lions and even a cheetah with her baby. In Etosha there are so many animals that after a few days you almost start looking at herds of zebra with the same indifference as cows. If there is one thing the guidebooks are right about it’s that this country is incredible to spot wildlife!

Sometimes small animals are just as impressive as big ones

We were lucky enough to spot the lion king in Etosha

How much land is fenced off

One of my favorite things to do when travelling is to explore cities, villages and especially nature by foot. Taking short walks or watching the sunset on top of a hill you just climbed. On long bus journeys in south America I often felt the urge to stop on the way and go explore and I was looking forward to do exactly that with our rental car. What I didn’t take into account were all the fences! Of course this partly has to do with people trying to keep animals and wild game on their land, but having a fence on both sides of the road definitely takes a bit of fun out of a road trip. From what I have seen so far it seems like most of the land is privately owned or managed as a national park. Of course once you’re on private land you don’t notice all the fences because single people own insane amounts of land, but when you drive from one place to another fences are omnipresent – hindering spontaneous explorations, picturesque lunchbreaks and good pictures of nearby game. So even though Namibia has hardly any inhabitance and a lot of incredible nature it is difficult to explore by yourself or get off the beaten path.

How popular cycling is

In one of the driest countries in the world, where temperatures over 40 degrees are an almost daily occurrence, distances between villages are long and natural shade is basically non existent there is one thing I didn’t expect to see often: bicycles. Surprisingly though cycling is  super popular in Namibia. During the time with my family I counted five people travelling on their bikes – about the same amount I saw in 5 months in Southamerica. There were also countless locals cycling in full gear on dusty roads in the middle of nowhere. Cycling definitely is more of a sport than a means of transport here – but a popular one. A few days ago my Workaway host Ben took the summer camp children, other volunteers and me to see thousands of cyclists pass by on the two day FNB Desert Dash from Windhoek to Swakopmund. Crazy!

Some of the crazy cyclists – don’t be fooled by the clouds, it was a super hot day!